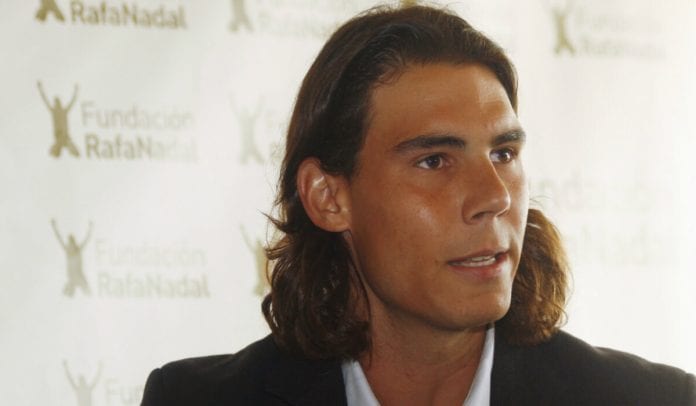 Rafael Nadal is a Spanish professional tennis player, currently, world No. 1 in men’s singles tennis by the Association of Tennis Professionals (ATP). Nadal has won 17 Grand Slam singles titles, the second most in history, as well as a record 32 ATP World Tour Masters 1000 titles, a record 20 ATP World Tour 500 tournaments, and the 2008 Olympic gold medal in singles. In majors, Nadal has won a record 11 French Open titles, three US Open titles, two Wimbledon titles, and one Australian Open title. May his quotes inspire you to take action so that you may live your dreams.

1. “I learned during my career to enjoy suffering.” Rafael Nadal

2. “Losing is not my enemy, fear of losing is my enemy.” Rafael Nadal

3. “I always work with a goal – and the goal is to improve as a player and a person.” Rafael Nadal

4. “I am the only player who can beat me.” Rafael Nadal

5. “Endure – put up with whatever comes your way, learn to overcome weakness and pain, push yourself to breaking point but never cave in. If you don’t learn that lesson, you’ll never succeed as an elite athlete.” Rafael Nadal

6. “It’s not the time to look for excuses.” Rafael Nadal

8. “I think when you compete every week, when you play under pressure daily, you find your rituals to be 100 percent focused on what you’re doing.” Rafael Nadal

9. “I play each point like my life depends on it.” Rafael Nadal

10. “It’s important to have people around you with enough confidence to say if you are acting in a good way. Normally, when you are at the top, people say everything is fantastic. Probably in that moment it is what you want to hear, but it’s best to be reminded how to act properly.” Rafael Nadal

11. “My tennis is aggressive, though I wouldn’t say that it’s more physical than technical. I rely more on technique than physique, but being physical is always a help to me.” Rafael Nadal

12. “Even if I have already peaked, I have to believe I can improve. I wake up every morning, and go to practice, with the illusion that I’m going to get better that day.” Rafael Nadal

15. “The glory is being happy. The glory is not winning here or winning there. The glory is enjoying practicing, enjoy every day, enjoying to work hard, trying to be a better player than before.” Rafael Nadal

16. “Enduring means accepting. Accepting things as they are and not as you wish them to be. And then looking ahead, and not behind.” Rafael Nadal

17. “I was passionate about soccer. I still am. Odd, though – playing soccer always made me much more anxious than playing tennis. On soccer days, I’d be out of bed by 6 in the morning, all nervous. But I was always calm when it was time for a tennis match. I still don’t know why.” Rafael Nadal

18. “I like fishing. Not actual fishing – I like the peace and quiet of being at sea. It’s different.” Rafael Nadal

20. “Everything I dreamed of winning, I’ve won, and nobody will take it away.” Rafael Nadal

22. “More than anything, believe that you can win.” Rafael Nadal

23. “However great your dedication, you never win anything on your own.” Rafael Nadal

24. “The first point is always important, more so in a Wimbledon final.” Rafael Nadal

25. “The only way of finding a solution is to fight back, to move, to run, and to control that pressure.” Rafael Nadal

26. “Tennis is all about dedication, motivation and the will to win.” Rafael Nadal

27. “I have no sense of humor about losing.” Rafael Nadal

28. “If you lose, you cannot enjoy the victories. So I have to accept both things.” Rafael Nadal

29. “For me, it is important to win titles and for that I need to work hard, stay healthy and be able to compete. The rest, I always say, it comes.” Rafael Nadal

30. “You need to love what you are doing and appreciate every moment.” Rafael Nadal

31. “I appreciate a lot in this life; the things you cannot buy.” Rafael Nadal

32. “I have lived my whole life with high intensity.” Rafael Nadal

34. “I’m lucky enough to do what I like for work – not everyone’s that fortunate.” Rafael Nadal

35. “Work hard. Have fun and make it happen.” Rafael Nadal

35 Sports Quotes To Make You A Winner